Ischgl has got a perfect start for the winter season 2017-2018.
With massive snowfall in the recent weeks, the Ischgl ski resort has now opened over 70% of all slopes and almost 80% of the 45 lifts run.

The amount of snow means it is now possible to ski on a total of 166 km slopes out of a total of 238 km. With 166 km of open slopes Ischgl is now the resort in the whole world with the largest open ski area available to skiers.

Watch the video from the opening day, November 23, 2017 for Ischgl ski resort

“Early snowfalls have provided a good base for the ski area and lift company Silvretta Seilbahn AG’s snow groomers have ensured that the open slopes are in great shape to launch Ischgl’s five-month-long season,” a spokesperson for Ischgl ski resort claimed.

The new €12m expensive Palinkopf chairlift had the debut on the opening day for the ski resort. The luxury lift are decorate with photos of famous people who have performed in Ischgl’s Top Of The Mountain concerts – including Robbie Williams, Kylie Minogue and Muse.
Find much more information, statistics, webcam, slope maps, daily updated snow reports and much more here: 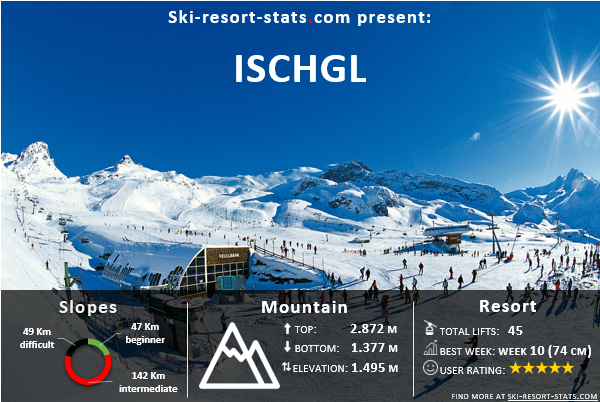